Season 5 of Cobra Kai is almost here. It will be on Netflix in September, which is earlier than expected since season 4 came out in December 2021. You can also watch a full-length trailer, which is full of action and shows Chozen’s big comeback and Terry Silver’s evil plans to make the Cobra Kai dojo bigger. There’s also a look at Johnny and Robby’s trip to Mexico to look for Miguel.

Here is everything else you need to know about the new episodes so far, including some exclusive quotes from the people who made them. We also have all the details about that explosive trailer, the cast (including a newcomer for season 5), what is known about what the plot might be about, and a lot more. So, buckle your black belts and keep reading to find out everything you need to know about Cobra Kai season 5.

The fifth season of Cobra Kai will finally be on Netflix on September 9, 2022. That’s before the usual release window for the show, which is between December and January. All of the episodes of the season are likely to come out at the same time. There isn’t a split between summer and winter like in Stranger Things.

The first trailer for season 5 of Cobra Kai has come out, and you can watch it above.

Terry Silver wants to open franchises of the dojo all over the valley. This is hinted at in the trailer. Daniel LaRusso is fighting back, and he has asked his old rival Chozen for help to take the fight back to Silver.

The fifth season of Cobra Kai isn’t just about karate mischief in Los Angeles, though. Johnny and his son Robby are seen heading south to find Miguel, who ran away from home at the end of the fourth season to find his father.

From the trailer, we know that some characters are back. Daniel LaRusso and Johnny Lawrence will be back, which means that Ralph Macchio and William Zabka will also be back. Amanda LaRusso, played by Courtney Henggeler, is back, and so is Carmen Diaz, played by Vanessa Rubio.

Big bad Terry Silver (Thomas Ian Griffith) will have a big role in season 5, and John Kreese (Martin Kove) will probably be back as well (after a possible time in prison, but more on that later).

In the last few minutes of season 4, it was also revealed that Yuji Okumoto will be back as Chozen, a role he first played in The Karate Kid 2 and then again in season 3.

For the younger actors, Xolo Mariduea is back as Miguel Diaz, Mary Mouser is back as Samantha LaRusso, Tanner Buchanan is back as Robby Keene, and Peyton List is back as Tory.

Griffin Santopietro will be back as Anthony LaRusso, and newcomer Dallas Young will be back as Kenny Payne. According to Deadline, Young has been promoted to a series regular.

Deadline also says that Alicia Hannah-Kim has joined the cast as Kim Da-Eun, a South Korean sensei who is part of Silver’s plans for Cobra Kai’s growth. Ominous.

After his surprising role as Stingray in season 4, it’s not clear if Paul Walter Hauser will return as the character. 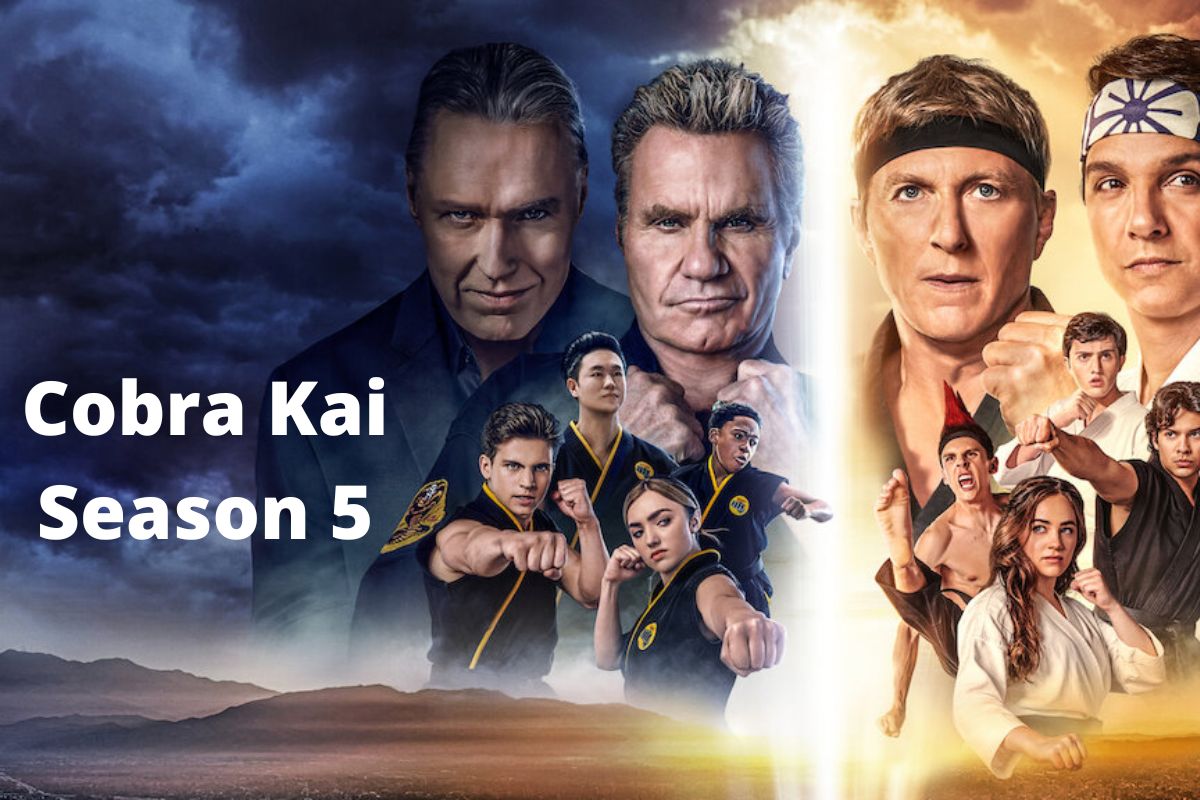 Season 4 was a big change for Cobra Kai, and season 5 will be about how things turned out. For one thing, even when Miyagi-Do and Eagle Fang (or Miyagi-Fang) worked together, they couldn’t beat Cobra Kai at the All Valley. Cobra Kai won both the girls’ tournament and the overall prize. Terry Silver has promised to open new dojos all over the Valley after the big win. This will make it harder to fight back against the Cobra Kais next season.

And there will be trouble. Daniel LaRusso still wants to bring down Cobra Kai, even though he agreed to stop teaching karate if Miyagi-Do or Eagle Fang didn’t win the tournament. He has asked Chozen for help this time. Chozen taught Daniel a secret and very useful Miyagi-Do move the last time they met, so we can expect the former bad guy to have more tricks up his sleeve in the new season. From what that trailer showed, it seems likely that Silver and the Cobra Kais will have a hard time working together.

Co-creator Jon Hurwitz told GamesRadar+ that Chozen is one of their favorite characters in the series. “When Yuji [Okumoto] came back in season 3, the scenes he did with Ralph [Macchio] were some of our favorites, both from karate and a comedy point of view. We love how he changes things and what he brings to them. And on top of that, he has demons and things in his life that he is working through. So he’s a fully developed character with things to do. What better time for him to come to the United States and join the fight in the Valley than when Terry Silver is on top? We all know that Terry Silver is a very strong opponent… If Cobra Kai is going to have Terry Silver on that side, bringing in Chozen, who has a history of fighting to the death and not being afraid, and who seems to be more skilled and more of a karate threat than Daniel, even at this point, it felt like it would be great for season 5 to have Chozen and Silver on opposite sides.”

Advertisement
John Kreese is currently out of the picture. At the end of the season, Silver set up his old friend Kreese to be arrested by blaming him for the brutal beating Silver gave to Stingray. Since Kreese seems to be going to prison, nobody knows what will happen to him this season. But he has been hard to beat in the past, so don’t write him off just yet. How he deals with Silver betraying him and Silver threatening his best student Johnny Lawrence is still to be seen.

Johnny, on the other hand, is looking for Miguel. Both of them will end up in Mexico, where Miguel has been looking for his father. The plan to make up with Miguel could run into trouble, though, because Johnny seems to be making peace with his son Robby Keene. Robby is going with Johnny on his trip south of the border, but things aren’t going well between him and Miguel. However, this could bring all three of them one step closer to making up and letting go of all the bad feelings they have for each other.

The future is less clear for the students of Miyagi-Do, Eagle Fang, and Cobra Kai. Daniel has no plans to close his dojo, so it seems likely that the Miyagi-Do kids will keep practicing karate. Cobra Kai is also growing, but it looks like they might lose some students in season 5. Robby seems to want to leave, and after All Valley champion Tory Nichols overheard a conversation that proved the tournament was rigged in Cobra Kai’s favor, she might be on her way out of the dojo, too, especially since she and Amanda LaRusso became closer as the season went on.

Since Johnny will be in Mexico for at least part of the season, likely, Eagle Fang will still train at Miyagi-Do. No one knows if any of the kids will keep their promise to Cobra Kai and stop learning karate for good.

One thing is for sure: Season 5 will be full of exciting things to do. “Season 5 has just been shot. We ended up in a situation where the season five finale is, I don’t want to say bigger, but a lot is going on “Hayden Schlossberg, who helped make the game, told GamesRadar+.

“So, that’s how it turned out. And we do think there will be more seasons. We’re knocking on wood and crossing our fingers that we can keep going after season five, even though we didn’t write it that way “He keeps going. “We’re going to do something else. We do still have some of our biggest cannons and fireworks left. So, we know we have some big, epic plans in the works. But you start to wonder, “Okay, how can you top that every season?” Fans will like it as long as it stays true to the characters. What we don’t want is for it to become more about the show than the story. So, this is the most important goal.”

If you’re looking for cameos from other parts of the Karate Kid universe, you might find some. Hurwitz told Deadline, “There’s a lot of craziness. If you’re a fan of the franchise, you might see some familiar faces, but you might not. There will be a lot of karate” (opens in new tab).

Josh Heald, Hayden Schlossberg, and Jon Hurwitz, who make the show, have said that there will be more.

Heald told Collider, “It has changed, but it hasn’t” (opens in new tab). “We still have an endgame plan. We are still writing after the fifth season. But it’s been fun to add new characters and plots and sometimes let them take the lead.”

Said Hurwitz: “From the beginning, we’ve never said how many seasons there would be. I think we’ve always thought it was at least six, but for all the reasons Josh mentioned, we’re still trying to figure out how long that landing is.”

Schlossberg told Deadline that the series could have more than a possible sixth installment. “We want to get somewhere,” he said. “We don’t know how many years it will take to get there. We’re having so much fun making it.” He also said, “If we get tired of it, we’ll stop before then. We already have plans for a few more seasons.”

We don’t know if Cobra Kai will keep going after season 5, but season 4 is shaping up to be one of Netflix’s most popular shows ever, so things look good.

The fourth season of Cobra Kai is now on Netflix. If you’re caught up, check out our list of the best Netflix shows ever to add to your list of things to watch.