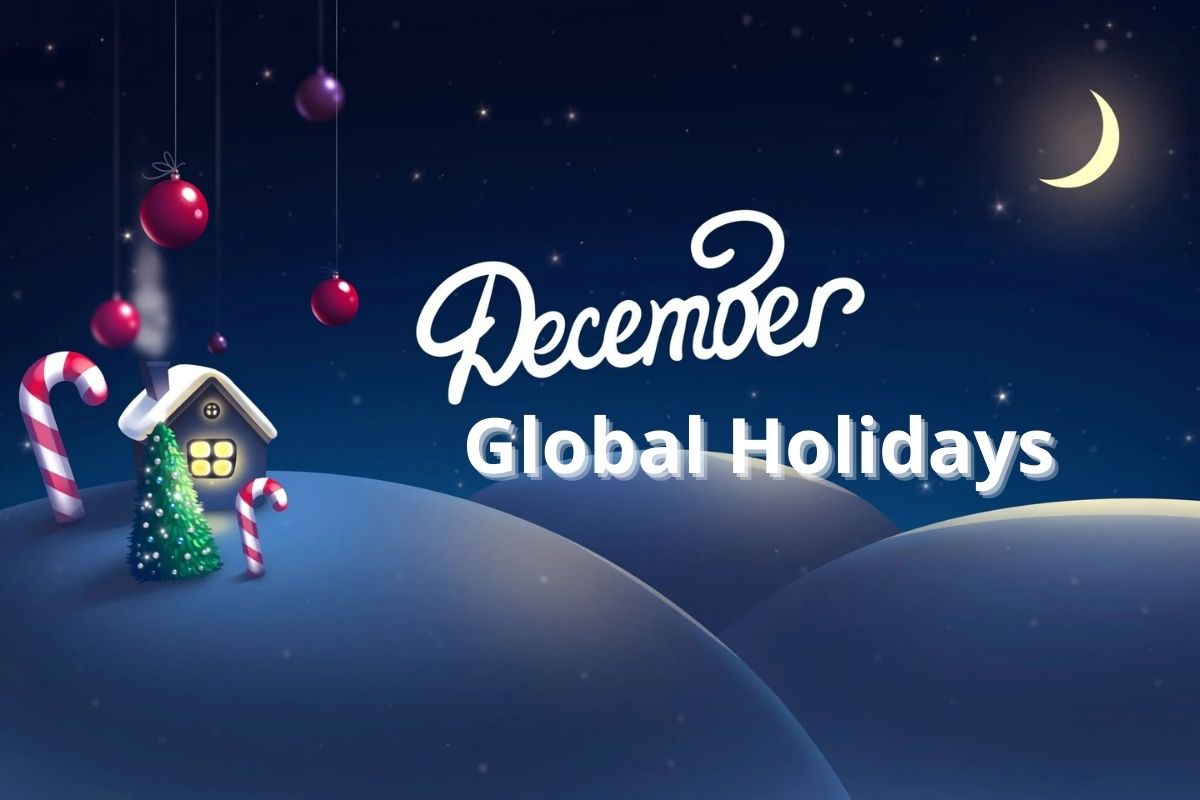 Holidays in December 2021 around the world: In every part of the world, December is regarded as the most joyous month. During December, it is referred to as “the World of Holidays.” Christmas, Hanukkah, Kwanzaa, New Year’s Eve, the Winter Solstice, and a slew of other major holidays are commemorated throughout December Global Holidays.

Parties and celebrations abound throughout the Winter Holidays or December Holidays season, some of which are traditional and some of which are more lighthearted. All kinds of events take place in December, including religious, cultural, and business-related ones. In the section below, we’ve highlighted a few of the major global holidays in December.

You may be surprised to learn that some of our Santa Claus customs are based on St. Nicholas Day, which is celebrated on December 6. If you’d like to learn about other December holidays, check out the December Global Holidays List below.

To know each festivity in detail, read the below section and learn the significance of the December Global Holidays, the date, and how & where the holiday is celebrated.

St. Nicholas sold all that he possessed & money to the poor people around. He spent his entire life helping and caring for the individuals who are sick and suffering. Many countries in Europe commemorate St.

Nicholas Day commences on the eve of the 5th of December, by giving candies, chocolate messages, modest gifts, and puzzles. Children lay out their shoes with carrots and hay thinking that St. Nicholas will exchange them for modest presents and treat. This day is significantly commemorated in numerous small towns and villages of Russia and Greece.

The lighting of a menorah in celebration of Hanukkah is a common custom. These menorahs can be found in the homes of many Jews. First, the menorahs are lit with a central candle, then more candles are lit with the chanting of Judaic blessings before and during the lighting process.

Festivities honoring St. Lucia are known as “the Festival of Lights” in Sweden, Norway, and parts of Finland. An early Christian Martyr, St. Lucy, is honored on this day, which falls on December 13, the 13th of each year. In the catacombs beneath Rome, a group of Christians was starving to death, and this woman was accused of quietly delivering food for them. As part of this celebration, young girls wear wreaths on their heads and carry candles as they wander the streets in traditional attire. Amid the long, dark Nordic winters, this winter celebration symbolizes light.

On Dec. 21, the shortest day north of the Equator and longest day south of the equator are both observed. On the 20th, 21st, 22nd, and 23rd of December, the December Solstice can occur, but these dates are extremely unusual.

Candles and bonfires are set up on this day to entice the sun back. Cooler weather, snow, skiing and ice skating, cuddling by a fire, and the Christmas atmosphere are all things that some people eagerly anticipate. During a trip in the woods, you’ll notice a calm, hushed quietness. 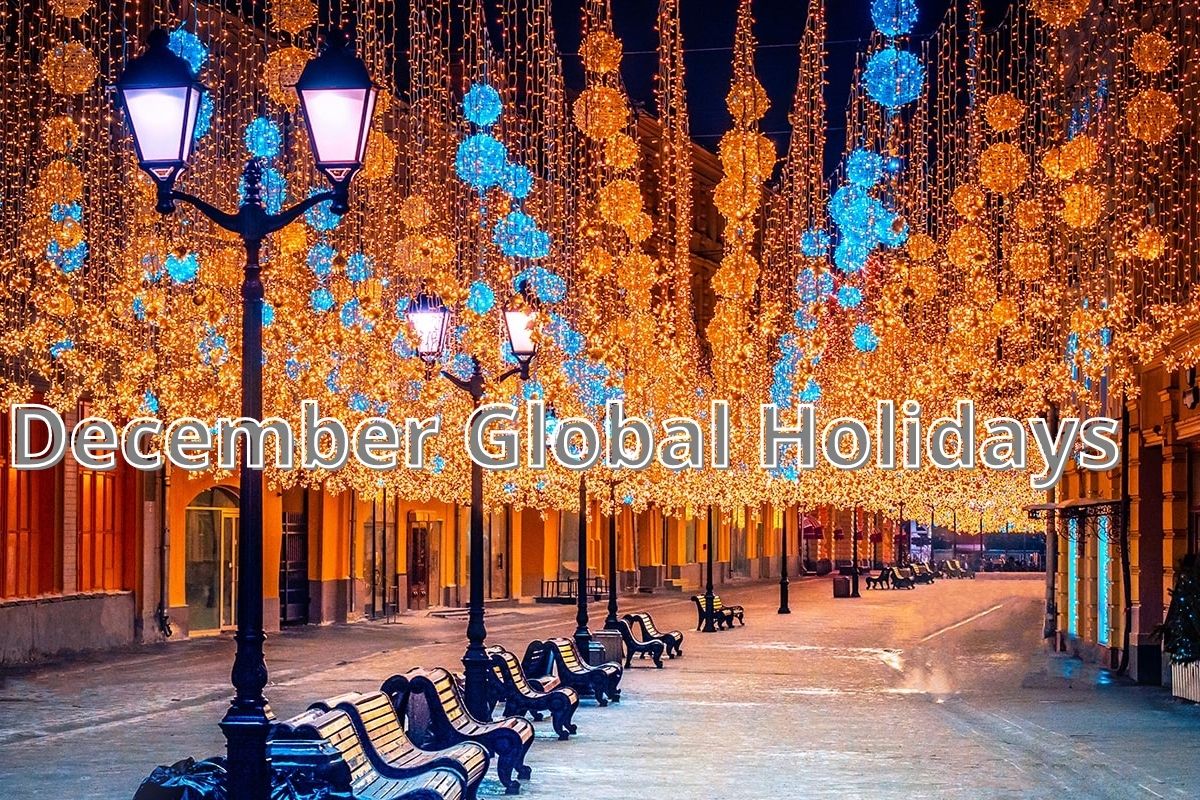 Christ’s birth, on the 25th of December in 2021, is the basis of the Christian holiday known as “Christmas.” Those who follow Christianity believe that Jesus was God’s son and thus the son of God. An elaborate party and gift exchange are part of the festivities of this worldwide celebration.

Children look forward to receiving gifts from their loved ones, as well as from Santa Claus, or Father Christmas, throughout the Christmas season. When it comes to celebrating Christmas, some people choose to keep it a private affair with their loved ones, while others invite friends and family to a Christmas buffet or potluck dinner. There are many ways to celebrate Christmas, but they all culminate in a great deal of joy and excitement.

Many countries, including Australia, Canada, the United Kingdom, and the United States, have a public holiday on Christmas Day.

The week-long commemoration of African-American history and culture begins on December 26th, 2021, and concludes on January 1st, 2022. This holiday is celebrated by millions of people all over the world, many of whom dress in traditional African attire.

Family members and guests are served coffee and baked goodies such as gingerbread and saffron bread (lussekatter) as part of the custom of celebrating St. Lucia Day in the homes of the Scandinavian people on this day. Kwanzaa is a religious event that occurs from December 26th to January 1st each year.

African Americans celebrate these holidays by dressing up in traditional attire, decorating their homes with fresh produce, and lighting a kinara (candleholder).

Since New Year’s Eve marks the conclusion of the Gregorian calendar year, it is one of December’s most popular global holidays. On New Year’s Eve, people from all over the world gather in celebration of a new year and a new beginning.

Osaka Festival, also known as the Japanese New Year, will be held in Japan on December 31st, 2021. As part of the celebration, residents will clean their homes from top to bottom, clearing debris from the previous year. Gather your friends and family for a traditional Japanese-themed feast.

Holidays in December 2021 around the world: In every part of the world, December is regarded as the most joyous month. During December, it is referred to as “the World of Holidays.” Christmas, Hanukkah, Kwanzaa, New Year’s Eve, the Winter Solstice, and a slew of other major holidays are commemorated throughout December Global Holidays. Parties…

Holidays in December 2021 around the world: In every part of the world, December is regarded as the most joyous month. During December, it is referred to as “the World of Holidays.” Christmas, Hanukkah, Kwanzaa, New Year’s Eve, the Winter Solstice, and a slew of other major holidays are commemorated throughout December Global Holidays. Parties…

No comments to show.