Even though it was great to see Sir Patrick Stewart play Jean-Luc again in Star Trek: Picard, it feels like the end is coming much too quickly.

Now that season two is over, there is only one more chapter before we say goodbye to the series for good. Will the character also be put to rest, or will he show up again in the ever-growing Star Trek universe?

At least season two won’t take as long to come out as season three did. To make up for the time lost while the pandemic was going on, the people in charge of Star Trek decided to film the second and third seasons back-to-back.

Pretty smart, don’t you think? Now, all fans have to do is wait for the series to be put together and given some A-Star effects to make it just right for them.

But what will happen in the last part?

So come with us here at readersgazette as we bravely go back into Picard’s world one last time and look ahead to what will happen in the third and last season.

Star Trek: Picard Season 3 Release Date: When Will It Air?

As was already said, filming for season three started right after season two, which wasn’t easy for anyone, especially Patrick Stewart.

After the end of season two, everyone’s favorite captain told Variety that filming for season three would be done in March 2022. Five weeks later, Sir Patrick said he was “still getting over it,” which makes us very excited about what’s going to happen next.

Sir Patrick said, “It was very tense.” “We shot the 10 episodes of season two and finished around 7 p.m. The next morning, we started shooting season three at 7 a.m. I think it went on like that for about 13 months. I know it’s been longer than a year.” 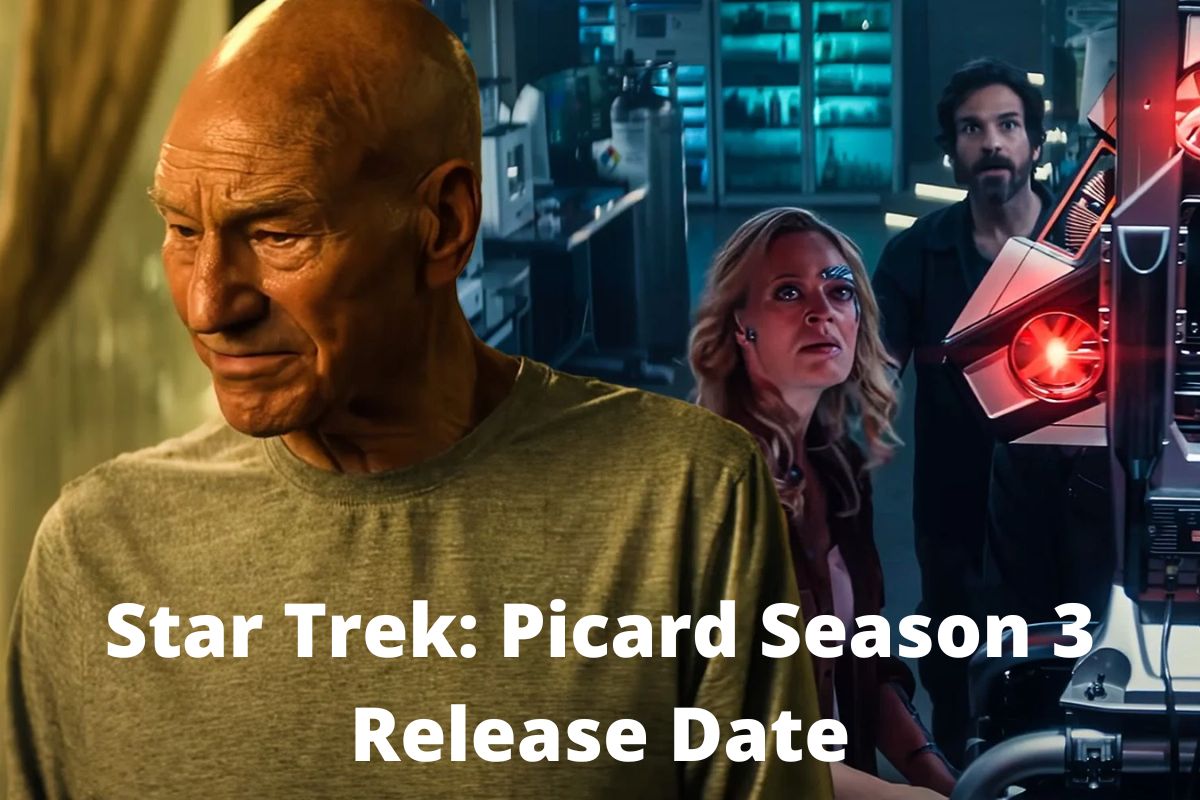 Keeping this in mind, we think the show should come out in early 2023 after post-production and previous release dates have been taken into account.

As of May 2022, no official announcement has been made. As soon as we know for sure, we’ll let you know.

After what happened in season two, we expect Patrick Stewart as Jean-Luc Picard, Michelle Hurd as Rafaella “Raffi” Musiker, Evan Evagora as Elnor, and Jeri Ryan as Seven of Nine will all be back for season three.

Alison Pill will be a big exception to this since she recently confirmed that Agnes Jurati won’t be back for the last season:

Pill told MovieWeb, “I know that season three will be the last.” “I didn’t take part in season three, so I can’t give away much about what happened. Everyone will be able to watch with me.”

Santiago Cabrera’s role is also uncertain now that Cristobal “Chris” Rios has decided to stay in the past and live out the rest of his life there.

Luckily, some very special cast members have been lined up to take their places. Picard had already said that many of the original characters from Next Generation will play important roles in season three before season two was even over.

Terry Matalas, who is in charge of the Picard show, said in a happy statement (via Deadline):

“It seems like it was just yesterday that my dad and I watched the first episode of Star Trek: The Next Generation, which came out almost 34 years ago. It was the first thing that got me interested in science fiction. So, it’s only right that Jean-Luc Picard’s story ends with his closest and most loyal friends from the USS Enterprise, just as it began. It wouldn’t be enough to say that it’s an honor to give these characters a proper send-off.

“The rest of the Star Trek: Picard cast and crew and I can’t wait for fans to see this final, high-stakes adventure on a starship in season three!”

Patrick Stewart told EW after the end of season two how the Next Generation crew might come back in season three:

“We will meet them, but it won’t be at all like getting back together. This isn’t just a get-together. Everyone has a job to do, and that’s about all I can say because I think season three is going to be very exciting. A lot of it will be about how the characters we’ve known for a long time have changed.”

For now, we don’t know much about the plot, but Stewart hinted that season three might be the most interesting of all:

“When I read the end of season two for the first time, one of the things I said was, ‘Where the hell are we going from here?'” Because it seemed like there was almost an end to it.

“For a moment, I thought, ‘Oh no, are we going to finish early and the show will end?’ But we did not. And in many ways, I thought season three had some of the most interesting episodes and moments of the whole show.

But what else will happen after that? Well, Sir Patrick’s words seem to put an end to the world after the last batch of episodes.

“I think Picard has said his last word and looked at his colleagues for the last time,” he told Variety. “I’m happy with how we’re ending season three. Perfect. Every time I think about it, it makes me sad, but it’s great.”

Star Trek: Picard Season 3 Trailer: When Can We Expect It?

If Q doesn’t come back and mess with time again, we probably won’t see anything that looks like a new trailer until early 2023.

But we are keeping our eyes and ears open and will let you know as soon as we find out more.

Check back here often, and we’ll let you know soon.