Jennifer Aniston and Reese Witherspoon will be back for a third season of the newsroom drama The Morning Show on Apple TV, but there will be some changes, like a new showrunner.

The Morning Show is a workplace drama about Alex Levy (Aniston) and Bradley Jackson (Witherspoon), who are both working at a morning news show where Alex’s former news anchor Mitch (Steve Carell) is being accused of sexual misconduct.

“If #MeToo was the focus of season 1 and season 2 has so many issues but deals with the impending pandemic, I would love to see how the world realigns after quarantine,” Witherspoon told The Hollywood Reporter about season 3. “Even though it seems optimistic to say that right now when people are still trying to figure out how complicated COVID is and how it affects different industries, But culturally, the whole world has changed in so many ways. The way we communicate and work, and the way we talk to each other, are all examples. There’s a lot to talk about and deal with.”

When is The Morning Show season 3 release date?

The Morning Show will most likely return in the fall of 2022, but no date has been set yet.

Who will be in The Morning Show season 3 cast?

Since we don’t know much about the cast of The Morning Show, here are our best guesses:

“I hope I get into a lot of trouble,” the actor told TV Insider, “because it’s always fun to be in the middle of a storm.”

Who is the new showrunner of The Morning Show?

Charlotte Stoudt, who has written for shows like Fosse/Verdon and Homeland, will be in charge of season 3 as the showrunner. She will take over for Kerry Ehrin, who created the show and will be a consultant for the new season. She will also keep making new shows for Apple TV as part of an overall deal that was already announced.

Stoudt said, “I’m excited to be working with Apple TV and The Morning Show.”

Stoudt told The Hollywood Reporter that one of the fun things about The Morning Show is that it is funny. “You can write scenes that are a little less tight and have a little bit of a West Wing or Mad Men vibe to them. Most thrillers aren’t very broad. The fact that they are very narrow is both a strength and a weakness. You can have a little dark humor along the way, but you kind of have to keep turning that screw. I try to choose things that make me think, “Can I do that?” I’m not sure. So give me a chance. I think that’s what all writers do.”

Matt Cherniss, who is in charge of programming for Apple TV, said, “It’s been exciting to see The Morning Show get better and better over the past two seasons. It explores current events that resonate with audiences all over the world, and it’s also very addicting and entertaining. We can’t wait to see where Charlotte takes these amazing characters in season three and to see Jennifer, Reese, and the rest of our amazing cast bring more magic to the world of morning television.

What happened in season 2 of The Morning Show?

Alex had a lot of ups and downs during Season 2 of The Morning Show. She talked about her role in the #MeToo situation on the show. As a result, she and Bradley tried to shake things up at The Morning Show; she got divorced; she worried that she would be “canceled” when Maggie Brener’s book came out; she broke down completely when she heard that Mitch (Steve Carell) had died, and then she got COVID-19.

“It never stopped! I did think that the writers were trying to kill me at one point!” The Hollywood Reporter asked Aniston about it. “I thought, ‘Oh, my gosh. You guys! We’re crawling to the end here.'” 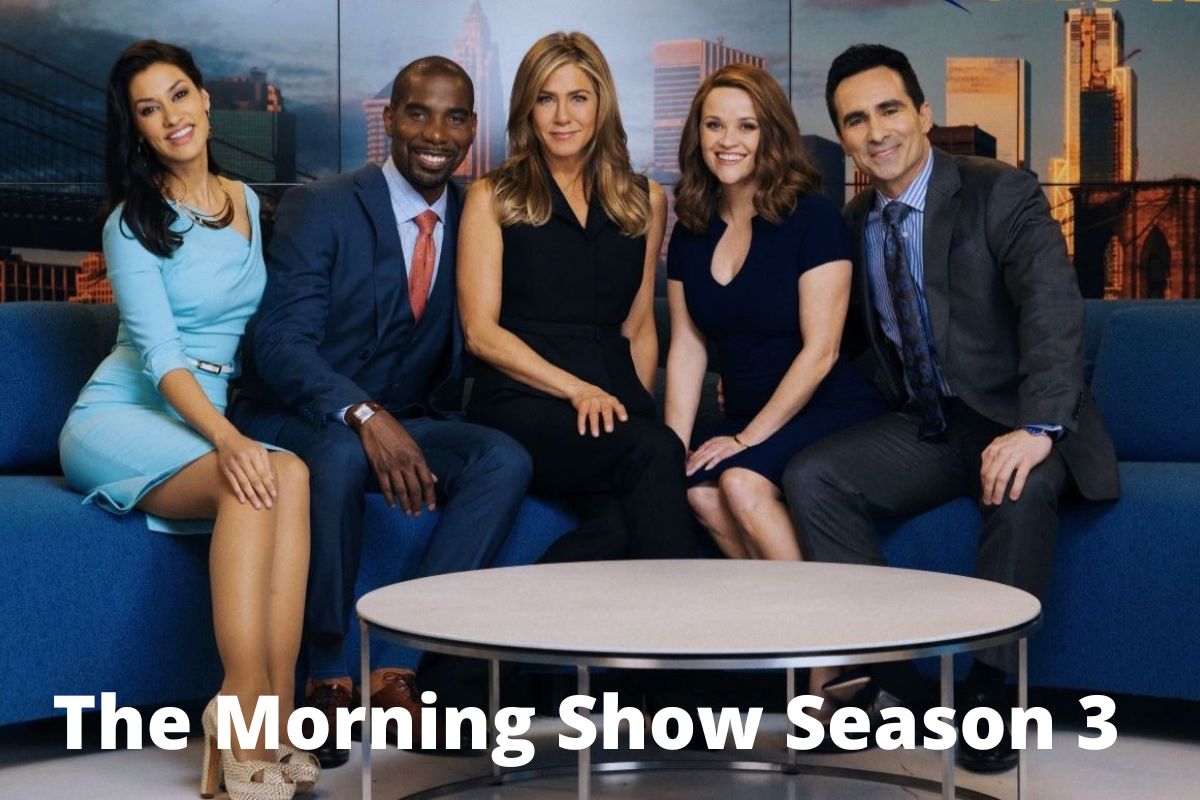 Bradley’s relationship with girlfriend Laura Peterson also had its ups and downs. First, she didn’t want to come out, and then Cory Ellison told her that he loved her. Laura went to Montana to be quarantined, and Cory was there for her when Bradley’s brother came to town, had a mental breakdown, and left.

Witherspoon told The Hollywood Reporter, “I’m interested in their love triangle between Laura and Cory and how complicated her relationship with Cory is.” “But, again, it’s someone she works with, so I’m very interested to see what happens.”

Season 2 of the show also dealt with the COVID-19 pandemic. It ended in March 2020, right before the first New York City shutdowns. Season 2 ended the same way as season 1: The Morning Show went off the air after Alex said, “Stay safe and stay sane.

What will The Morning Show season 3 be about?

Even though Ehrin won’t be the showrunner for season 3, she did hint at what might happen before handing over the reins.

She told The Hollywood Reporter that between seasons 2 and 3, there might be a time jump instead of picking up where the second season left off.

She said, “You could jump into the future,” because she wasn’t interested in learning more about the COVID-19 pandemic, which was how season 2 ended. “I think it will be done, done, and done. You could go the other way. It’s a cool little universe. You can put it anywhere in time, and I think the challenge of the show is coming up with a big subject.”

Chris also said to Deadline, “I want to see more of Bradley and Laura. I feel like Alex has finally accepted who she is and faced her worst fears for the first time since the pilot. I want to see how the phoenix rises from the ashes for her and how she learns to live a full life and be present and loving.”

Ehrins also says that we might see more of Paola Lambruschini (Valerina Golino). Paola was the person who talked to Mitch before he died and brought the video back to the United States.

Are Jennifer Aniston and Reese Witherspoon friends in real life?

How many episodes will there be in The Morning Show season 3?

It hasn’t been said yet, but like seasons 1 and 2, there will probably be 10 of them.

Where can I watch and stream The Morning Show season 3?

Apple TV+ is the only place where you can stream Season 3 of The Morning Show. You can also stream the first two seasons right now.