What We Do in the Shadows season four is more eagerly anticipated than ever after a season-three finale loaded with twists. Fortunately, a fourth season of the vampire-comedy documentary has already been announced.

Based on the Taika Waititi and Jemaine Clement film of the same name, the FX mockumentary series follows the immortal Staten Island housemates, including Nandor’s familiar Guillermo, as they carry out their daily routine.

Season three of Shadows has already come and gone, concluding on a dramatic cliffhanger that sets up an ambitious fourth season like a passage of history in a vampire’s never-ending life.

Before the third episode of the comedy series had even aired, FX’s head of original programming, Nick Grad, told Variety that “Fans can’t seem to get enough of What We Do in the Shadows and FX is ready to feed that demand by setting up the series for a fourth season” Then, what can we expect when our favorite drainers return? Detailed instructions are included.

What We Do in The Shadows Season 4 Potential Release Date: When Will it Air?

Even though no release date has been set, it has been confirmed that the new season will launch sometime in 2022.

Due to the coronavirus pandemic’s delays, season three will launch in the fall instead of the spring as originally planned.

Filming for the fourth season of What We Do in the Shadows is scheduled to end up in December 2021, according to Harvey Guillén, who plays Guillermo.

“Season 4 of @theshadowsfx wraps up shooting today, and we can’t wait to share the results with you! Who’s excited?”

This means that the series has now been in post-production for approximately six months. In light of this, a release date and trailer announcement may be forthcoming for the film’s fans very soon. Count your blessings.

What We Do in The Shadows Season 4 Cast: Who’s Returning?

Kayvan Novak as Nandor, Matt Berry as Laszlo, Harvey Guillén as Guillermo, Natassia Demetriou as Nadja, and Mark Proksch as Colin Robinson will all return for the new season.

For the upcoming season, Proksch’s character will still be a newborn, and much of his work “will be done independently on green screen and other effects,” he just said in an interview with Deadline.

There will be lots of high-profile cameos as well. As a member of the Vampiric Council, Taika Waititi was back in season three, along with Arrested Development’s David Cross and Blade’s Donal Logue.

This year’s season two even saw Mark Hamill take on the role of Jim, the vampire, so we’re ready for more big names to show up in the future.

What We Do in The Shadows Season 4 plot: What Will Happen?

Season four’s most intriguing question is how Colin Robinson’s unexpected comeback will affect the show. Season three was dominated by the energy vampire’s quest to understand more about his species and its origins, only for him to get dangerously ill and eventually rot like a manky pumpkin. He does, however, presently exist as a scary baby.

Is Colin Robinson going to be the same person when he’s back in the adult world? Paul Simms, showrunner, has asked himself that very question.

“Will he turn out to be another energy vampire when he’s an adult? Are there any possibilities for him to become normal and interesting? Season four’s main mystery is around that “He revealed this to Newsweek.

In response to a question from Assignment X, writer Sam Johnson explained how they achieved the effects for Colin in season four:

“It is a challenge,” I would say, and it’s one of those things where you have to write it without thinking, ‘How are we going to achieve this?’

“After that, you’ll find yourself in endless Zoom sessions wondering, “How the to eff are we going to execute this?” As for the problem, I think we’ve got an answer, which is both exciting and rewarding.”

Proksch commented when discussing the filming of Colin’s special effects:

“There will be some that I’ll be able to participate in, and some that will have to wait. This is a very difficult position.

Putting a grown adult’s face and gestures and acting on a baby involves a lot of technology,” he added.

In addition to that, we should see a shift in the relationship between Laszlo and Nadja. It had been planned that the former would follow his wife Guillermo to England, but he instead shipped her off and stayed behind in Staten Island to care for infant Colin Robinson.

We’re introduced to a variety of other vampires and monsters from around the planet as Nandor sets out on a journey to find meaning in his everlasting life.

There is an episode that Yana [Gorskaya] is directing in season four that we will be shooting, and that is probably the most ambitious episode we’ve done as far as seeing the other animals of the supernatural world,” said Simms at the 2021 New York Comic-Con.

Season four will not address the ongoing pandemic, though. Harvey Guillén, Guillermo’s actor, told SyFy Wire, “We’ve created a universe where people can escape to watch our show.” “These rivers should not be made muddy. All of us are aware of what is going on.” 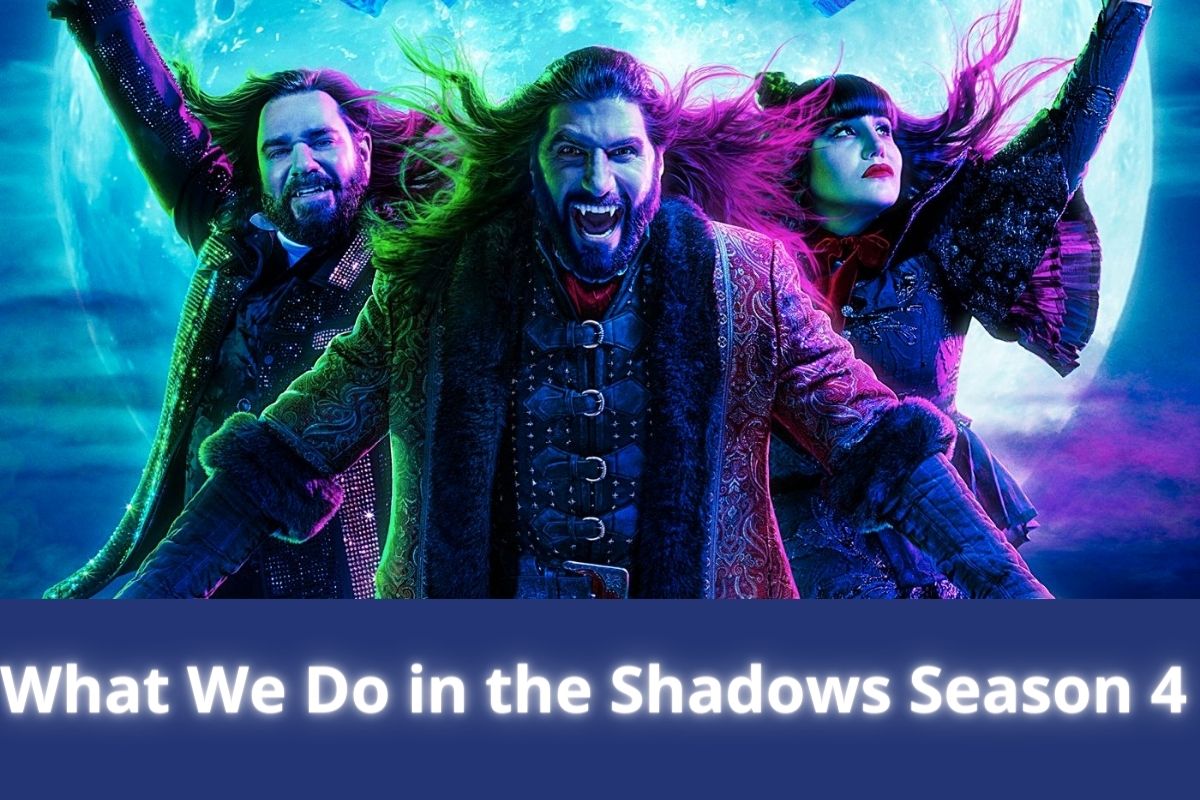 Although the cast is aware of this, they haven’t stopped speculating about how the pandemic will play out on screen. For Laszlo, Matt Berry imagined: “Even if they’d spotted the masks, I doubt they’d have given it much thought. Because no one else would be around in the evening, they’d have more time to stroll the streets.”

In addition, Nadja actor Natassia Demetriou stated: “You don’t have to pay any attention to current events because they are highly self-involved people who have experienced every president, every dictatorship, and every pandemic.

“Oh! This one was over so quickly!” they’d say. ‘Wow, this is quite a departure from the Spanish flu.”

What We Do in The Shadows Season 4 Trailer: When Will It Arrive?

Filming only recently got underway on season four, so there’s no trailer just yet. But we’ll be sure to keep you updated as soon as any new footage arrives. To pass the time, why not have a super-slumber?