Yellowstone is the only original scripted show on the Paramount Network right now, but who needs another? The show has been a rating powerhouse. In 2021, it was the most-watched show on broadcast, cable, and premium TV, with an average of 11 million people watching each week. Not surprisingly, Paramount Network has officially renewed the show for a fifth season and made guest stars Jen Landon (Teeter) and Kathryn Kelly (Emily) series regulars.

The modern-day Western debuted in 2018 as a sort of kickoff for the network’s rebranding. It used to be called Spike TV. The series is set in Montana and follows the ups and downs of the Dutton family, who run the largest cattle ranch in the U.S.

Taylor Sheridan wrote Yellowstone, which stars Kevin Costner as patriarch John Dutton. He and his family are trying to keep the ranch in the family, but they are having trouble with land developers, a nearby Indian reservation, and other enemies.

“Yellowstone continues to break records, with more than 11 million people watching the season finale,” said Chris McCarthy, president, and CEO of ViacomCBS Media Networks. “This shows we’ve hit a cultural nerve from the middle of the country to both coasts, and we still have a lot of room to grow on linear,” he added. “Our plan to turn Yellowstone into a universe of series to help Paramount+ grow is already working better than expected. 1883 and Mayor of Kingstown are two of the best titles.”

Will There Be a Yellowstone Season 5?

Absolutely! It was clear that Paramount would give the show a fifth season. The No. 1 cable show of 2021 always gets the highest ratings, and the number of people who watch it grows with each episode. It is tied with the spinoff series 1883 and the upcoming 6666 for having the most viewers on a cable network.

Yes! On May 16, Paramount said that the fifth season of Yellowstone was now being filmed in Montana. This information comes after Taylor Sheridan told Deadline that filming would start in May 2022.

Is There a Yellowstone Season 5 Release Date? 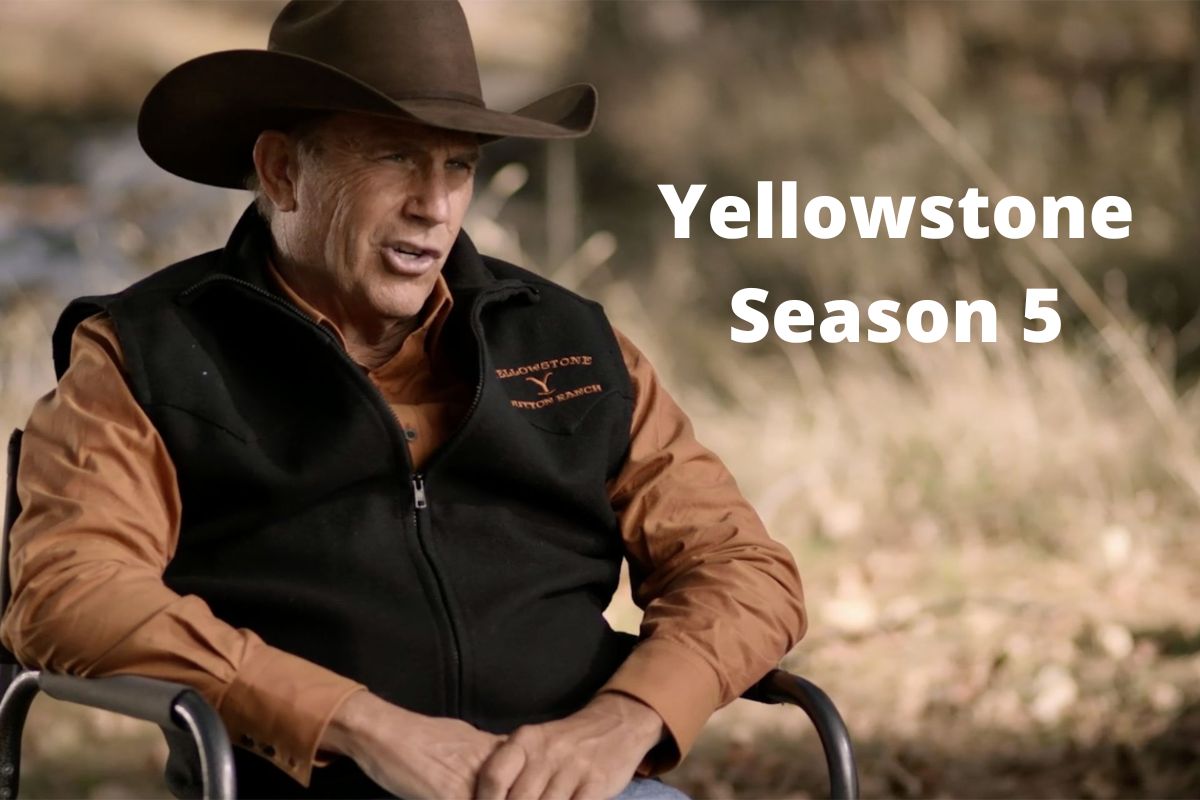 Who Is In The Yellowstone Cast?

Kevin Costner plays John Dutton, the father of the Dutton family. He is a rancher and businessman who is trying to keep his family from falling apart while keeping the Dutton land together. After being in a coma for months because someone tried to kill him in the last episode of season 3, he wakes up to find that not much has changed. So that Jamie doesn’t get too powerful, he decides to run for governor after the current governor, Lynelle Perry (Wendy Moniz), steps down to run for the U.S. Senate.

Kevin Costner & Modern West is a band, and Costner is the lead singer.

Beth barely made it through the mail bomb that blew up her office and, most likely, killed her assistant. While she was recovering, she spent most of her time sitting by her father’s bedside and planning her revenge on those who tried to hurt her and her family.

Beth does everything for either her dad or Rip. In the fourth season, she went to work for Market Equities to bring them down from the inside. To get what she wants, she gets Summer, a social activist played by Piper Perabo, to do what she wants. This makes her father very sad.

Rip keeps her grounded and in check, and he and Carter, an orphan, take him in to keep the theme of the Dutton family being a mess going. In the last episode of the season, she kidnaps a priest so he can marry her to Rip and then beats up Jamie.

In the first episode of Season 4, Kayce survives the ambush at his office as Livestock Commissioner, but he gets shot in the car chase and shootout that follows. While Kayce is out looking for bad guys, some hired militia members break into the Dutton home to hurt his wife and child. After Monica and Tate both get PTSD, he decides to move them out of the ranch and into their place.

At the end of season 4, he goes on a vision quest, and the future he sees doesn’t look good. He tells Monica, “The end of us,” when she asks what he saw.

Fun fact: Grimes is best known for playing Elliot, the brother of the main character, on the ABC show Brothers & Sisters and in the movies American Sniper and Fifty Shades of Grey.

Jamie’s strings are being pulled in every direction. John Dutton used to pull his strings, but now Garrett Randall (Will Patton) and sometimes Beth or his baby mama, Christina, do.

When John Dutton says he wants to run for governor, his adopted son Jamie, who has always wanted to be governor, goes crazy and is easy to manipulate until Garrett and Christina tell him he can still win.

After Beth talks to him about how he attacked the family and what will happen to him, she gives him three choices for what to do next. He picks the third option and kills Garrett. When he stops at the Train Station, Beth is there to take pictures of him getting rid of the body. In a way, she is taking control of the puppet.

Rip doesn’t talk much, but when he does, what he says is either sweet or hard. He is one of the few people who doesn’t fear Beth. He seems to find her funny more than anything else. He doesn’t like it when Beth brings home a lost child, Carter, but by the end of the season, he grows fond of him.

Cole Hauser’s father, Wings Hauser, is an actor, and his uncle, Erich Hauser, is also an actor. His grandfather, Dwight Hauser, is a director and producer. His mother, Cass Warner, started the production company Warner Sisters, and one of Warner Bros. Studios’ founders, Harry Warner, was his great-grandfather.

What do you have to say about this little thief? He becomes friends with Beth when they are both waiting for news about their dads on a hospital bench. When his mother dies and he is left without a parent, Beth takes him in and tells the police that she is his guardian.

Rip puts him to work cleaning out stalls, even though he doesn’t have to pay him. With help from Lloyd and the other ranch hands, he starts to learn how things work. He makes a few mistakes with Beth and John teaches him how to ride a horse.

In the first episode of the fourth season, one of the intruders is about to kill Monica when Tate shoots him. Both of them are traumatized by what happened that day, and Tate is still having problems from being taken. Staying on the ranch doesn’t seem to help. As soon as they leave the ranch, they seem to be much happier, and Tate seems to be doing well. Before Kayce goes on his vision quest, Monica tells him that she is pregnant.

Lloyd was angry for most of the season because he had to see Walker and Laramie making out in the bunkhouse, which made him see red. When he was finally so angry that he couldn’t take it anymore, he broke not only Walker’s guitar but also his face. He makes up for it by giving Walker a new guitar that he bought with money from the sale of a valuable item.

Walker got on Lloyd’s bad side last season when he kept dating Laramie, which made Lloyd very unhappy. After the fight in the bunkhouse, Rip sends them to the corral to fight again until they can’t fight anymore. Walker is branded and will always be tied to the ranch, but he tries to make the best of it by keeping his head down and doing his job.

In the middle of season 4, Teeter, who was mostly hard to understand, was fired because she was of the wrong gender. She argues to John that she should keep her job, and Rip backs her up. In the end, John lets her keep her job. She will be on the show more in season 5 now that she is a series regular.

Jen Landon is the daughter of Michael Landon, who played Al in Little House on the Prairie. When she was only 5, she appeared in an episode of Highway to Heaven with her father.

Colby has been a ranch hand at Yellowstone for a long time. He likes Teeter, but he doesn’t like being put in a box (or admitting to it).

Ryan is one of the boys who live in the bunkhouse. Whether he means to or not, his dry sense of humor and sarcastic way of talking makes him seem like a bit of comic relief.

This past season, we didn’t see much of the leader of the Broken Rock Indian Reservation. His plans to get the Dutton land back for his people seem to be on hold for now, but they will come back up at some point.

Mo is Rainwater’s everyman. He is his driver, his assistant, and does all sorts of other things for him. He has a bigger role this season as he helps Kayce with his vision quest.

With the renewal of the show for a fifth season, one of the more surprising news was that Kathryn Kelly would be a regular cast member. The British actress who plays Jimmy’s fiancee only appeared in four of season 4’s episodes. Could this mean that season 5 will also have a wedding?

Avery was there before Teeter, Laramie, and Mia. She was the first girl to live in the bunkhouse, and she worked on the Yellowstone as a ranch hand. Avery is not a new character, but we think we’ll see more of her in the next season. She only appeared in a few episodes in the first two seasons, and her character almost went away in the third season. However, she came back in the fourth season when Kayce helped her family find some stolen horses. She tells Kayce that she loves him, but he tells her that he’s already taken. Even though she seems to accept that she will be alone after Kayce politely turns her down, Kayce dreams of kissing Avery during his vision quest.

What Can We Expect In Yellowstone Season 5?

At the end of Season 4, Beth catches Jamie getting rid of Garrett’s body at the Train Station. This puts him in an awkward situation. By taking some bad pictures of him, she ends his political career for good. What will happen to Jamie because of this? What about Christina and their son? Won’t she want to know where Garrett is? Now that his hopes of running for office have been crushed, will Jamie be able to get away from the Duttons, or will he just give up and do what they say?

Caroline fired Beth without any warning, so she is now out of work again. She may take over as her father’s campaign manager. She is sure to keep making plans to hurt Caroline Warner and Market Equities. Will Warner follow through on what she said she would do to Beth and the Dutton land?

The results of Kayce’s vision quest are not what he had hoped for. Who was the woman who helped him understand his dream? Is it his unborn child, or is it someone else? Will he keep his job as livestock commissioner, or will he maybe run for governor as his father did?